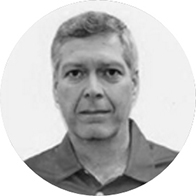 Ian Walter started his career with British Airways where he worked for 8 years as an Avionics engineer in the Helicopter division. He joined Motorola in 1988 initially rolling out of the Cellnet analogue followed by the roll out of some of the first GSM networks in Europe. In 1996 Ian left Motorola to join Silicon Valley start-up InterWAVE Communication Inc., where he was involved in the development of a new generation of GSM products for Corporate and Emerging markets. He later joined Altobridge and upon the spin out of it’s maritime business to form Blue Ocean Wireless, Ian was seconded to BOW as CTO where he successfully rolled out and launched the world’s first merchant maritime GSM service. Subsequent to Altobridge, Ian joined Argela as Director of Product Management for their 3G and 4G Small Cell product lines.